But not all at the same time. 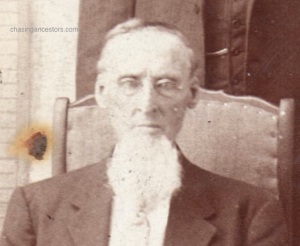 He is listed in the Peoples Guide of Hamilton Co., Indiana; by Cline & McHaffie; Indianapolis, 1874; on page 247 in the section on Washington Twp.: “Boone, Paul; farmer & mechanic; 2 m S E Westfield. Born in Indiana 1832; settled in Hamilton Co. 1839. Republican, Wesleyan Methodist.” Another note I have says he was a blacksmith. I’m not sure where that information came from.

He shows up in the 1850 US Census in Washington Twp, Hamilton Co., IN in his father’s home with his parents, his grandfather, John, and his sister Eunice. 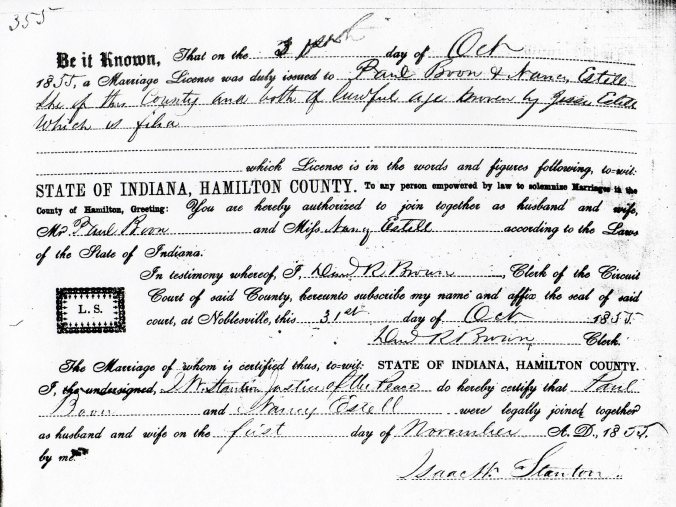 After Nancy died, he married 2 more times. When Grandma gave me her notes on the family, we had no clear idea who the other two wives were. Through the years, I have found more information to clarify the situation.

The 1900 US Census has Paul in Marion Twp., Boone Co., Indiana with wife, Loucinda. They had been married less than a year. She is 60 years old and it indicates her birth month and year are May 1840. She has 4 living children.

Ancestry.com’s Indiana Marriage Collection (1800-1941) has Paul marrying Lucinda (Compton) Carnine on Februrary 6, 1900 in Marion County, Indiana. She was probably in her 50’s but there is conflicting information in some of the records. She is listed as being 40 years old in 1880 on the US Census. At that time, she was married to Abram N. Carnine. They had 4 children. Lucinda died May 30, 1903 of stomach cancer. Her Death Certificate has her age as 58.

In 1910, Paul is listed in the US Census with another wife, Malinda. She is 75 years old, has been married 5 times, gave birth to 5 children, with none living. She and Paul had been married for a year. They are living in Sheridan, Hamilton Co., IN. There is also a “step-daughter” listed in the family, Anna McMurtry.

Paul married Malinda (Keyste/Kist) McMurtry on March 12, 1909 in Hamilton Co. Indiana. She was 74 and he was 77. According to the newspaper announcement, they got married at her home on East 4th Street in Sheridan, IN. The application for marriage indicates that she was married 4 times before marrying Paul. Her obituary from the Sheridan News, in 1914 lists her husbands as Permaneas Beam, William Young, William Higbee and David McMurtry. She had a total of 3 sons and 2 daughters from these marriages, all of whom preceded her in death. The obit also mentions 7 step-children. So I guess Anna McMurtry was one of those step-children.

So there we have it, Paul Boone’s 3 wives: Nancy Estle, Lucinda (Compton) Carnine & Malinda (Kist) McMurtry. While he was married 3 times, he only had children with his first wife, Nancy.