Jumping ahead a little in the story of Arza Millikan (my Great-Grandfather) & his friends Elmer Davis & Harry Kincaid homesteading in New Mexico. They secured claims and moved to New Mexico in August of 1907. At the same time, other members of the Sheridan, Indiana community moved to New Mexico to homestead as well. The Woods family moved out to settle on land near Amistad in Union County, NM and helped establish a “Hoosier Colony.” On December 13, 1907, the Sheridan News published a letter sent from the Woods family describing the first Thanksgiving day the homesteaders shared:

The letter continues: We thought that perhaps it would interest our friends in and about Sheridan to know how we spent our first Thanksgiving day in our new home. We attended services at our little town of Amistad and you would have been surprised if you had walked in and seen the crowd of people that were there, measuring about 300. After several songs by the choir and accompanied by two cornets and organ the latter presided over by Prof. Kelsey, late of Boston School of Music. Our pastor then gave a splendid address, theme “Our New Mexico Home as We See It,” which was heartily applauded.

We then sat down to a fine dinner consisting of turkey, chicken, cranberries, pumpkin, mince and other pies, cake and hot coffee, in fact all of the good things that go to make a Thanksgiving feast. After an intermission of one hour we were called to order and in a very short time $285 was collected to finish paying for the church and Academy building. Also $15 was raised for a charity fund. The service was closed with a splendid prayer by one of our many preachers for which this locality is noted. The rest of the day was spent in getting acquainted with our neighbors which we find to be a very fine class of people from almost every state in the Union. At the close of the day’s service the air resounded with the Academy yell which is too complicated to write in detail. As our party of 8 wended their way over the trail homeward (1/2 mile south and 3 3/4 east) we could look over the prairie and see the people going in all directions, some walking, some horseback, others driving burrow, horses & mules. Many in big wagons pulled by bronchos as was our own wagon.

After doing our chores, we had our regular Thursday evening prayer meeting and our hearts went up in prayer for our loved ones and friends in our good old Hoosier state of whom we had thought a great many times during the day and we thanked our Heavenly Father for his many blessings and tender care for us in our Western home. The Woods Family

Since Arza and his friends settled near Amistad as well, it is expected that they attended this gathering.

I do have a picture labeled “Thanksgiving at Moody’s.” Most likely it is from Thanksgiving 1907.

The Moody family had the property bordering Arza’s on the East. Alfred Moody and his wife, Mary had three daughters, Sylvia, Florence and Helen. Sylvia and Florence were teen-agers in 1907. I expect they were a little infatuated with the young men who lived nearby.

The photo isn’t the best quality & the people are unidentified, but I think the 3 in white are the Moody girls.

So the homesteader’s first Thanksgiving in New Mexico was spent visiting with new friends, enjoying food, company and entertainment. I guess that’s what holidays are about.

Westward Ho! Well, almost. As mentioned in Part 1, Arza Millikan (my Great Grandfather) and his friends Elmer Davis & Harry Kincaid were making plans to move out to the land they had made claims on in New Mexico. They gathered their supplies, made plans to take care of business at home in Indiana, and prepared to head West.

Other members of the “Hoosier Colony” were on their way in August. This article from the front page of the Sheridan News, August 9, 1907, tells of the Woods family moving out West:

Arza, Elmer and Harry were ready to leave later in August. But first, they had a going away party with some of their friends. On August 16, 1907, there was a notation in the Sheridan News of this gathering:

One of the items my Grandmother gave me was a collection of pages stitched together at the top to make a little booklet. I think each young man received one of these from his friends at this party. It contains a few practical hints and recipes for the men to take along with them. 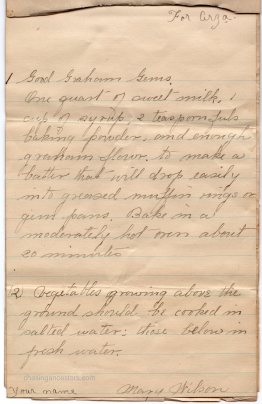 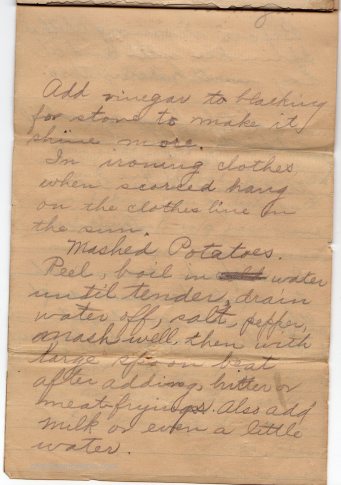 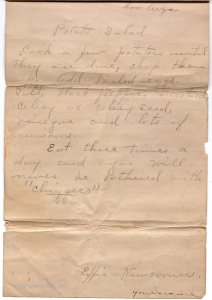 This little recipe booklet gave Arza the basic recipes for such staples as Mashed Potatoes, Baked Beans and Potato Salad. Then there were the recipes for Puff Ball Donuts & Good Graham Gems. Our favorite recipe is for Fried Mush—an Indiana farm staple. Step one of the recipe is to go to Harry’s and get some leftover mush.

Each recipe or hint was personally written for Arza by one of his friends.

So then the young men took their hints and well-wishes from friends and family and headed out to New Mexico. Arza’s journal entry stated that they “shipped goods, provisions & mules down in a car with Walter Edwards & Tim Jones.” The trio of friends left August 20, 1907 with Mrs. Susan Walker & Cyrus Johnson via Chicago this time. They were met in Nara Visa by Clarence Walker on Thursday evening, August 22, 1907.

Arza’s notes do not indicate if the men went directly to their claims or stayed in Nara Visa for a while while they gathered all of their provisions and building supplies. Homesteaders often stayed in Nara Visa in camps while waiting for supplies. There is a picture of Arza standing in front of a tent which was reportedly made for him by the young women of Sheridan. I wonder if this photo was taken in Nara Visa.

The three friends have made it to New Mexico to start their adventure. I wonder what they will encounter out there?