One of the first things I do when looking for information on an ancestor is a simple Google search. I did that one day on a guy named Silas Portis & found an interesting piece of information. The first time I “Googled” Silas, I saw this drawing for a patent on a gate opening device. 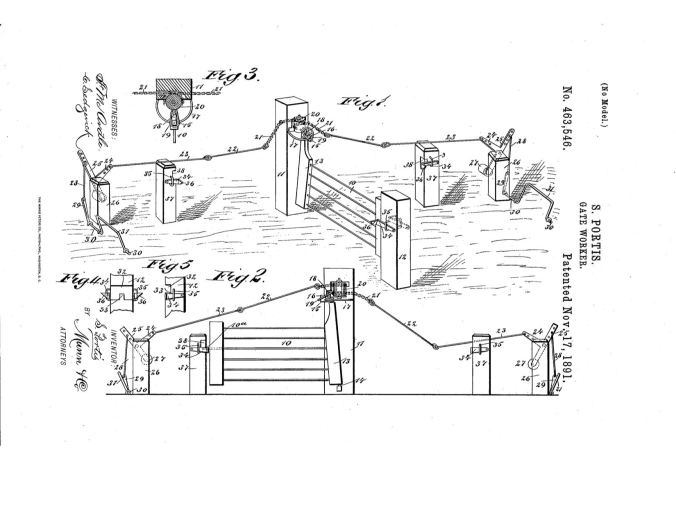 Lately, the Google search gives a link in Google Books to Scientific American magazine from February 4, 1893, pg.73. This includes a nice illustration as well as a description of Silas’ device.

The whole idea is that a person would not have to get down from the wagon or carriage, hold the horse steady and at the same time open the gate, then repeat the same process to close the gate once the wagon had passed through.

Looking at the US Patent office rules, a person who wanted to file for a patent would have to submit a detailed drawing and description of the device as well as the appropriate fees. I searched the US Patent & Trademark office website <uspto.gov> for more information on Silas’ patent. Since the first drawing I found had a patent number, I was able to find the actual patent for Silas’ “Gate-Worker.” The Patent No. 436,543 was dated November 17, 1891. The specifications are very technical with a description of each element of the device and how it all worked in sequence to open & close the gate. Other information found in the Patent paperwork was that Silas was from Monrovia, Indiana and he assigned two thirds of the patent to Telemichus N. Bennett and Albert Taylor who also lived in Monrovia.

So who was Silas Portis? He shows up in the 1850 US Census in the Northern subdivision of Davidson County, North Carolina with his Mother, Rachel and siblings, Emeline, Elizabeth and George W (my GG Grandfather). Silas attended school within the year and is listed as a laborer. 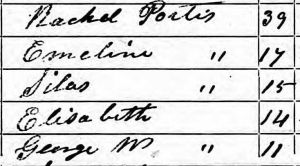 Silas was born June 14, 1833 according to his headstone. Other records list 1834 or 1835 as his birth-year. In 1860, he shows up in the US Census, still in North Carolina, but this time in the Southern Division of Guilford County. He is listed as an Engineer with a group of other men, including 2 Miners, a Blacksmith, Carpenter, another Engineer and several laborers. The assumption is that he worked in a mine. There were gold mines in Guilford County, NC. His wife, Rebecca and their two daughters, Louise & Charlotte, are in a separate listing from Silas, but on the same page. I haven’t found any information as to what Silas did during the Civil War.

In 1880, Silas was living in Guilford Township of Hendricks County, Indiana. He has married a 2nd time after his first wife, Rebecca died. The 1880 Census lists Silas with his wife, son and step-son. At this time he was working in a Saw Mill.

On June 18, 1883, the Hendricks County Republican newspaper reports “Silas Portis has hired to the Monrovia millers as an engineer. Silas has been with us for some time and we regret that he is going to leave us, though while we lose a good citizen Monrovia gains one.”

A sad event occurred in Silas’ family in September of 1888. His 10 year old son, Cecil died. The report is that Cecil was leading a cow to pasture with the rope tied around his waist. The cow became frightened and ran, dragging Cecil and killing him.

In 1900, Silas lives in Monroe Twp. of Morgan County, Indiana. He is listed in the US Census with his wife, Mary and 18 year old daughter, Ovis (or Avis). His job description is again Engineer. By this time, he has already secured his patent for his Gate-Worker device.

So, even though Silas Portis was not a direct ancestor of mine, he is still part of the family & it’s kind of cool to know that he has his name on a US Patent. I wonder if he made any money off of his invention? Knowing Silas’ story, maybe it’s not so unusual that some of my relatives have the need to “tinker” with things.