So what is so important about a name? To genealogists and family historians, names are the building blocks of our research. If the name is wrong, then the trail it takes us on is also wrong.

For instance, since I have the actual Army discharge papers for my ancestor, Allen Erp, I know that any official records for the Civil War would have him listed as “Allen Urp.” The Earp genealogy book that I used to connect the line to Wyatt Earp actually has my ancestor, Allen, listed as a Confederate soldier. So the authors didn’t know to look for the “Urp” spelling. I did send them a correction.

Clark Millikan is listed as Millican on his Civil War papers. This is not quite as drastic of a spelling difference, but it may also affect finding all of the correct records. (Yep, there is a story there…)

The most challenging spelling difference is for my Great-Grandfather, Arza Millikan. In 1907 the Rev. Gideon Tibbetts Ridlon compiled a genealogy of Millikan and other related families. The book, History of the Families Millingas and Millanges of Saxony & Normandy, is the go-to reference for anyone researching the Millikan line. However, there are no sources listed in this book. My assumption is that Ridlon probably sent notices to as many people as he could with the Millikan and similar surnames and asked for them to return family information to him. The section of the book that includes my direct ancestors is “The Posterity of William Millikan.” I always know when someone has used this source for their Millikan research when they list my G-Grandpa’s name a Arza Hamer Millikan (p.713 of the Ridlon book). I mentioned this to my Grandmother, who very adamantly said “his name was Arza Homer, not Arza Hamer!” However, all of the records, notes and letters I had for him only had Arza H. So how do I prove that his name was Homer? Finally, I found a few records that gave his full name, the record of Union Grove Friends Meeting in Hamilton County, IN; his marriage record and his WWI draft registration. So I finally had evidence of what the family knew all along.

Now that we know his proper name, who was this guy? Well, Arza was my paternal Great-Grandfather. He was born near Sheridan, Hamilton County, Indiana on July 21, 1883. His parents were Lewis Elwood Millikan (1855-1959) and Martha Ellen “Mattie” Barker (1858-1932). He had one sister, Edna (1886-1966). Arza grew up on the family farm on Mulebarn road. He also worked on his Grandfather, Clark Millikan’s farm, which was nearby. He spent his entire life (except for about 1 year) on the farm. From what I can tell, he didn’t graduate high school. He did attend Farmer’s Extension classes at Purdue University.

He had a few girlfriends that I know of, as my grandmother kept some of the letters from these ladies. She also kept some of his journals as well. Seems like he was quite the “lady’s man.” Maybe it was that he was considered quite the catch being a successful farmer. Arza was a dairy farmer, winning prizes for his bulls and cows. He was also a bee-keeper. He had an orchard on the farm & grew corn and other crops as well. So farm life was quite busy for him and his family. He helped establish the Farm Bureau in Adams Township, Hamilton County, IN. 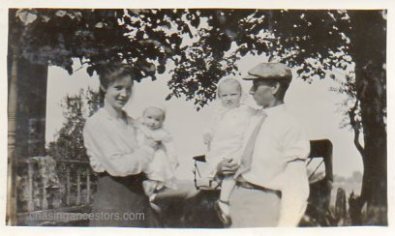 He and his family were members of the Society of Friends. He started in Union Grove meeting, then moved to Lamong Meeting when Union Grove dissolved. Arza died November 24, 1964. He was 81 years old. He is buried with family members in the Union Grove cemetery near Sheridan, not very far from where he lived. Arza was an interesting character & I expect there are a few stories to tell of him…