I already wrote a little about my GGG Grandfather, Clark Millikan (1824-1926). At 101 years old, he was the oldest man in Hamilton County, Indiana before he died. But he didn’t start out in Indiana.

Clark was a “birthright” Quaker. I have not found the early Friends Meeting records to confirm this yet. As I’ve mentioned before, Clark must have been disowned at some time, probably for marrying Nancy, as she was not a member of the Society of Friends. When Lydia and Clark married, Lydia was disowned for marrying him. 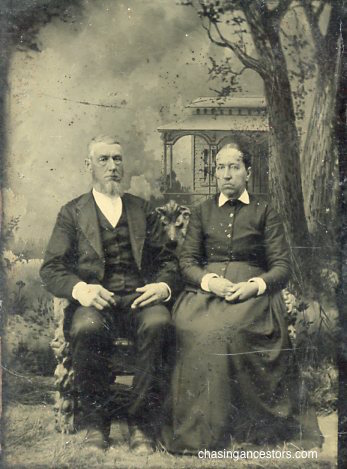 Clark & Lydia started their life together as tensions were growing in the Southern United States. The Quaker beliefs of pacifism and anti-slavery put them at odds with their fellow Southerners. Many Quakers had left the state of North Carolina to settle in other parts of the country where they did not have to deal with the slavery issue.

Quakers were in a quandary at this time, they were against carrying arms and slavery. Early on in the War, men were permitted to pay a fee of $500 to avoid service and hire a “substitute.” But later in the War, as the Confederate Army needed more men, that was no longer an option and Quaker men were expected to follow orders when drafted. In 1862, the upper age for conscription was raised to 45, then in 1864 it was 50. Any man who was capable of carrying a weapon was drafted, whether they were willing to carry that weapon or not. Some men hid out and some left the state.

Being a Quaker, Clark was not willing to bear arms against his fellow man. The story goes that Clark paid the fine the first time he was called for the draft. So this would have been after 1862, when the age limit was raised.

On June 4, 1864, Clark was received into membership of Marlborough Friends Meeting in Randolph County.

It is interesting that there are several young men requesting or being admitted into membership at this time, including Clark’s brothers, John & Allen. Perhaps they were trying to have official paperwork to verify their religious affiliation. Lydia had their 4th child, Lunda (1864-1926) in August of 1864.

Then, Clark was called for the draft again. This time, he had no choice but to follow the orders. The records have his name as “C. Milichan” of Randolph County, NC. He enlisted at Mecklenburg County, NC on November 15, 1864. He is listed as a private in the Confederate Army, 6th NC Infantry, Company A.

One thought on “Another Civil War Story”