Richard Edwin Boone was born August 28, 1906. He was the son of Alva and “Allie” Erp Boone. He was 15 years younger than his big brother, Chester and 9 years younger than his sister, Mary (my Great Grandmother). He was 11 years old when his niece, Margaret Millikan, my Grandmother, was born. So in essence, Uncle Edwin bridged the gap between the two generations. Edwin grew up on the Boone farm near Sheridan, Indiana.

On April 30, 1920, when he was 13 years old, Edwin placed a want ad in the Sheridan News for a “second hand bicycle, must be in good condition.” I don’t know if he ever got it. In April of 1922, he shows up in the Sheridan News as a member of the “Sheridan Jersey Calf Club.” Also in that newspaper was the announcement that Edwin “won the first prize of $10 offered by Elliott’s drug store for the best painting of the Jonteel bird trade mark.” Jonteel was a line of cosmetics and the trade mark symbol was a stylized colorful bird of paradise. Edwin also worked on the Sheridan High School Newspaper. In November of 1922, he is listed as the associate editor of the Black & White. In 1923, Edwin is a reporter for the paper.

Then in June of 1925, there was an article on page 1 of the Sheridan News about how Edwin “drew the cover page design for the special Outing Edition of the Indianapolis Star.” The special section was the “Vacation and Travel Guide” & Edwin’s illustration included outdoor and travel scenes. The article said that Edwin had “been engaged in drawing and sign painting” since graduating High School in 1924 & “he seems to have exceptional ability & will probably figure in commercial art circles.”

Edwin also did illustrations for the Sheridan News. When I have looked through 1926 and 1927 editions of the paper, I recognize his drawings. He was pretty good.

Grandma showed me a copy of the 1927 Sheridan High School yearbook. The illustrations in the book were also done by Edwin. I think she gave the book to the Sheridan Historical Society.

So Edwin found a career as an illustrator and sign painter. He advertised on the jalopy he drove. Grandma had a couple of pictures of him with his vehicle. Edwin is sitting on the car. I’m not sure who the other man is. 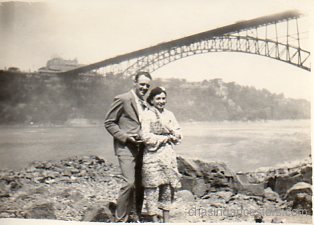 On August 3, 1934, Edwin married Mary Pauline Barker. She was the daughter of Arthur and Jennie Boxley Barker. Edwin & Pauline were both members of Sheridan Friends Meeting. I’m not sure how long they were an item before they got married, but was it a coincidence that the 1927 yearbook he illustrated was Pauline’s Senior yearbook? The caption for this picture is “the bride and groom.” It was taken soon after they got married.

Census records have Edwin, age 22, in 1930, living with his folks in Hamilton County IN. He worked as a sign painter. In 1940, Edwin and Pauline have moved to Indianapolis, living at 2706 Olney St. They owned their home, valued at $2100. They were living at the same place in 1935. Edwin was working as a Decorator for a Contracting Co. and earned $1200 in 1939. The Indianapolis City directory for 1943 has Edwin listed as a painter for CWC. Most likely CWC is Curtiss-Wright Corporation, a propeller manufacturing company.