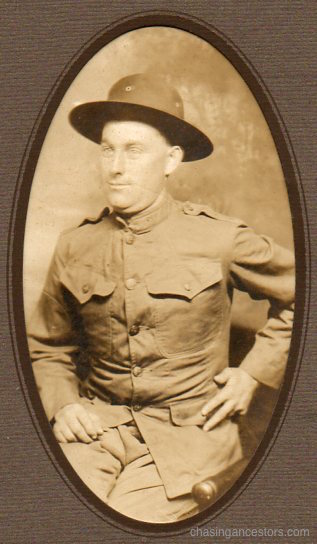 He was 27 years old & single when he registered for the draft in 1917. His card # is 28. He was living in Clay Twp, Morgan County, Indiana. He worked as a farmer. He was of medium height and medium build, had blue eyes and brown hair.

The Martinsville Democrat newspaper was a source of information regarding the draft. On July 13, 1917 it lists Fred with draft #822 of 1501 registrants from Morgan county. He was not called in the first draft.

Then on April 26, 1918, 58 men were called to Martinsville to the conscription station. Thirty of those men were selected to go to Camp Taylor, Kentucky for training. This is to “fill Morgan county’s quota on the first call of the second draft.” It said that farmers would be given “deferred classification for the present if their cause merits it.”

Even though Fred was a farmer, he did not get the deferred classification & on Friday, May 3, 1918, he is included as part of the group of 33 men who left for training camp the Saturday before “to make themselves ready for actual service on Uncle Sam’s firing line in his great fight to make the world safe for democracy.” It is said that there was a large group of friends and family members at the train station to see the men off.

I got a copy of his service record card from the Indiana State Archives. It states he had the rank of Private in the 159 Depot Brigade, which was essentially the training brigade at Camp Taylor. He was inducted on April 27, 1918 in Morgan County, IN. He was discharged November 1, 1918. He did not go overseas.

The story is that Fred got the flu while in the Army and this is why he was not shipped out. In searching for more information regarding the flu epidemic during the war, I came across a blog post from January 4, 2011 from the Filson Historical Society <filsonhistorical.org>. It mentioned that at Camp Zachary Taylor in Louisville, KY, there was an influenza outbreak in 1918 that killed 824 soldiers and caused 13,000 to be hospitalized. I expect Fred was one of those 13,000.

Fred’s service record card also lists his honorable discharge as S.C.D. When I searched the internet for this code, I found that it is “Service Connected Disability.” His card states that “in view of occupation he was, on date of discharge, reported 10% disabled.” So I guess his experience left him with some kind of permanent disability. I guess I’ll have to do more searching on what exactly his issue was.

Grandpa had a large oval photograph of Uncle Fred that he gave me. It is the same picture as above. It is very cumbersome & the frame is broken, so it sits in a box in my closet instead of hanging on the wall. There were also a few less formal photographs of him in uniform that were given to me by Grandpa.

Once he returned home, Fred spent the rest of his life in the Brooklyn, IN area, continued farming and served as the sexton of the Brooklyn cemetery. He never married. He died at age 81, March 8, 1972 at the Veterans Hospital in Marion, Indiana. Grandpa also had Fred’s burial flag. It is now in my collection as well.

One more thing: On November 15, 1918, the Martinsville Democrat had the front page story of “The end of the war, the world war, the greatest conflict between man and peoples that, we hope, will ever be recorded in this world’s history.” Unfortunately, there were more wars to come. But the end of the “Great War” is commemorated each November 11 as Veteran’s day. Thank you to all who have served.