Hanging by a chain on the wall of my Grandmother McKinley’s home was a picture encased in glass with a black background. The picture was difficult to make out because it was so old. It now hangs in my living room. The picture is actually a tintype of a young boy. It took me quite a while to figure out that it is the memorial picture of William Singleton Erp.

William Singleton was born April 9, 1846 in Pulaski County, Kentucky. His parents were Allen Erp and Sarah (Alexander) Erp. He carried the names of his Grandfathers: William Alexander and Singleton Erp. He moved to Indiana with his parents when he was about a year old.

Grandma said he was known as “Uncle Sing.”

There is a commemorative marker in Spencer Cemetery, Hamilton County, IN leaning against his parents’ grave marker that states: “Wm. S. son of Allen & Sarah Erp belonged to the 40th Ind. Co. E. He lies buried at Nashville Tenn. Age. 15Y 11M & 28D”

So, he was a soldier during the Civil War? What happened to this 15 year-old boy? Grandma said the story was that a group of Southern women entered a train with a basket of cookies for the soldiers, over half the soldiers died, including Wm. S. Erp. Grandma requested that I find his grave in Nashville.

I found a Roll of Honor book in my local library: Roll of Honor: Names of Soldiers Who Died in Defense of the American Union Interred in the National Cemeteries, Vol XXII-XXIII, Washington, Government Printing Office, 1869, p. 76, that listed his death date as April 2, 1862 & that Wm. S. was buried at the National Cemetery at Nashville, TN. I had no idea there was a National Cemetery in Nashville. One day I went to Nashville, stopped by the cemetery and found his grave marker. I couldn’t stay long because a storm was coming up. I had enough time to find the marker and take a picture for Grandma. 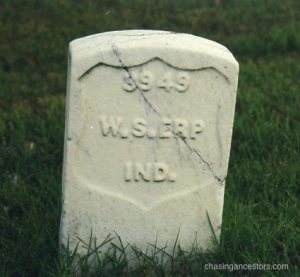 But I wasn’t satisfied there. Was the story really true? Was he poisoned? I found a book in the Clinton Co. IN, library: Muster Roll of Co. E. 40th Regiment Indiana Infantry, by Helen E. Grove, 1990. This gave his rank as Private, Age: 15, Height: 5’4”, Eyes: Brown, Hair: Dark, Complexion: Dark, born in Pulaski Co., KY, occupation: Farmer. He was enrolled Oct. 16, 1861 at Hillsboro, IN. His Residence was Hillsboro, Clinton Co., IN. It states he died in April 1863 (off by 1 year) in a hospital at Nashville, TN of Lung Fever (pneumonia). So I guess the story of poison wasn’t true.

William Singleton spent 6 months in the Union Army. According to the National Park Service information about the 40th Indiana Infantry, the unit was mustered in December 30, 1861. Went to Bardstown, KY until February 1862. Then marched to Bowling Green, KY & on to Nashville, TN from Feb. 10 to March 13, 1862. Then they started for Savannah, TN March 29 & on to the Battle of Shiloh April 6, just after Wm. S. died. Who knows how long he was ill before he died. I expect he got sick during the march to Nashville. I wonder how his parents were notified. And did his Father, Allen, know where Wm. S. was buried when he came through Nashville while he was in the Union Army?

Also in Grandma’s collection of pictures,was this picture of the boy soldier:

Then I wonder how a boy was allowed to join up. But in doing research on the 40th Indiana, I found through the National Park Service website that some of Wm. S.’s relatives were in the same Regiment. John T. Alexander is listed as a soldier. I don’t have much on him, except he may be Wm. S.’s Great Uncle. Another Great Uncle, Galen Alexander, age 30, died in January 1862 in Louisville, KY after contracting a fever. So illness was an issue for the soldiers. Hard to imagine what the conditions were like. The Regiment lost more soldiers (206) to disease than to wounds (143).

Finally, in a small photo album full of tintypes, many not labeled, I found another copy of the picture that is in the black frame: 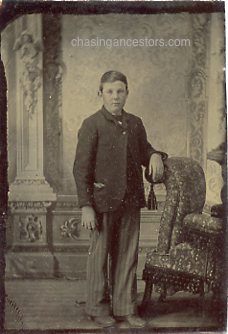 I like this one better than the one of him in uniform. But he looks so young!
Rest in peace “Uncle Sing.”