When I visited my Grandmother, Margaret Millikan McKinley (1917-2007), through the years, I remember seeing a trophy high up on a bookcase. I never looked at that trophy very closely & never asked about it. Then, my Great Aunt, Frances Millikan Haskett (1918-2018), displayed that trophy at her 95th birthday party & gave it to one of her nephews.

So then things started to make sense.

I found some Sheridan News articles about the Dairymen Association Picnics on the NewspaperArchive.com website.

The page-one article from August 18, 1916 indicated that the 1916 picnic was the 2nd annual event and hailed it as a “dairy picnic and bull show.” There were estimated to be two to three thousand in attendance. There were also “several exhibits of machinery silos, etc.” Not to mention the merry-go-round and ice cream stand! A letter I have that Arza’s Aunt Alice Millikan Cox (1864-1926) wrote to her daughter, Carrie (1888-1985), said that there were “200 gallons of ice cream given away and 30 men to dish it out.”

The article stated that “Sheridan has become, … one of the big milk producing centers of the country & the greatest in Indiana.” It listed the names of the Sheridan Dairy Association officers: M.M. Evans, President; A.H. Millikan, Vice President; C.O. Ogle, Secretary-Treasurer. The officers and the Dairy Association were commended for holding a dairy show which had “good talks on dairying and it offered a great opportunity for displaying and studying and selling high grade thoroughbred dairy cattle.”

The Sheridan News article listed the winners of the Cattle show. Turns out Arza won more than one award. He won 1st place for “Bull Class 1, 3yr. and over,” Sweepstakes Bull, Best Jersey Bull and Bulls Sold in Sale. Of the four silver cup trophies awarded, Arza won three, all for Jersey Bulls. He also won $77 in prize money with $70 of it being for one bull. I don’t know what happened to the other trophies.

The letter from his Aunt Alice also mentioned his winnings. She said he got a “nice blue bow with a button and a bow with a picture of a bull on it” for a bull that he bought at the show. That may have confirmed something that I saw in a picture of Arza and a bull. 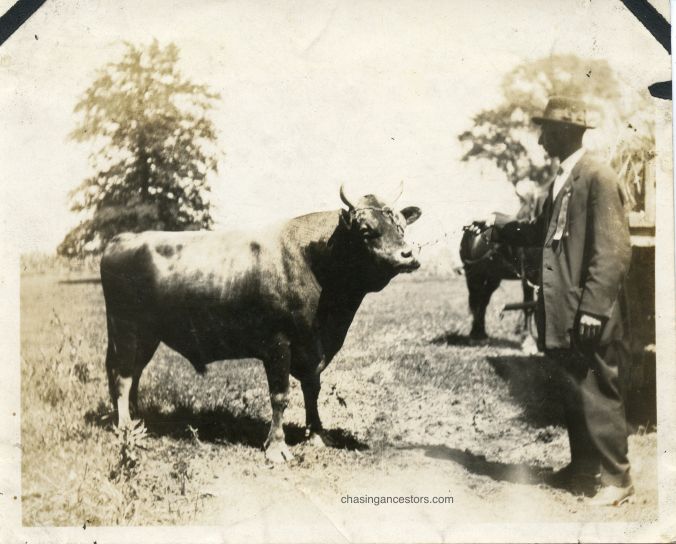 Is Arza wearing a ribbon on his jacket?

Is this one of the prize-winning bulls from this Dairy Picnic? At this point I don’t know.

In 1915, Arza won 1st prize for the Class 1 Bull category and the Sweepstakes Bull Prize. He also gave one of the instructional talks at the picnic.

Two more pictures of Arza and his bulls: 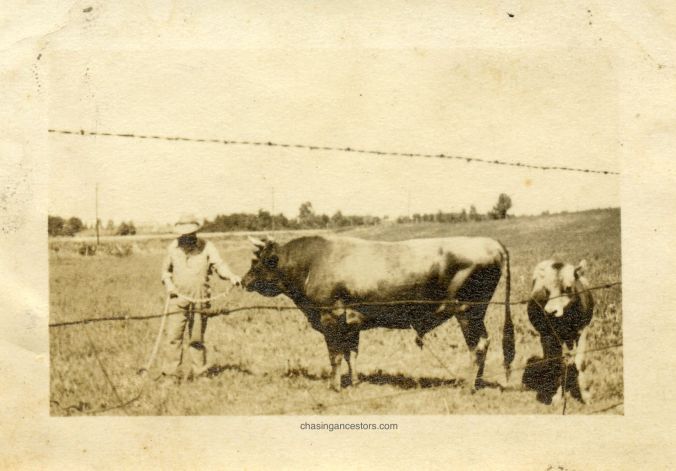 Perhaps one of these was a “Prize Winner.”

Regardless, it seems that my Great-grandfather, Arza H. Millikan (1883-1964), was gaining a reputation for the quality and pedigree of his bulls & dairy cattle.

3 thoughts on “The Trophy”