This sounds like a “Family Feud” category, but it isn’t. I have a small leather billfold in my collection. It obviously belonged to my Great-Grandfather, Oscar McKinley (1887-1969). While there wasn’t any money in it, there were a few interesting items tucked inside. 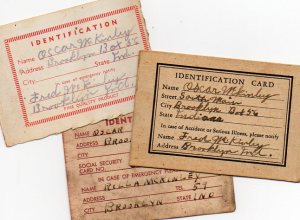 First, there were 3 of those paper “Identification” cards that come in wallets. All 3 had Oscar’s name & his address: Brooklyn, Indiana Box 56. He lived on South Main Street. His telephone # was 59. The emergency contact on 2 of the cards was Oscar’s brother, Fred. On the 3rd card, the emergency contact was his wife, Rilla. Oscar and Rilla Throckmorton Caldwell got married in 1941. Wonder why he had 3 cards. 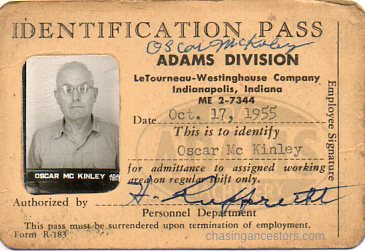 Then there was another official ID card for his job at Adams Division of the LeTourneau-Westinghouse Company in Indianapolis. It is dated Oct. 17, 1955.

H. Rupprecht was having a birthday February 17 & there was a request for birthday cards. Notice on the above work ID card, H. Rupprecht signed the authorization as representative of the Personnel Department.

There was a business card for the Rev. H.M. Myrick, pastor of the Church of the Nazarene at 325 W Raymond, Indianapolis. H.M. Myrick was probably Herman Myrick, who was Oscar’s cousin. 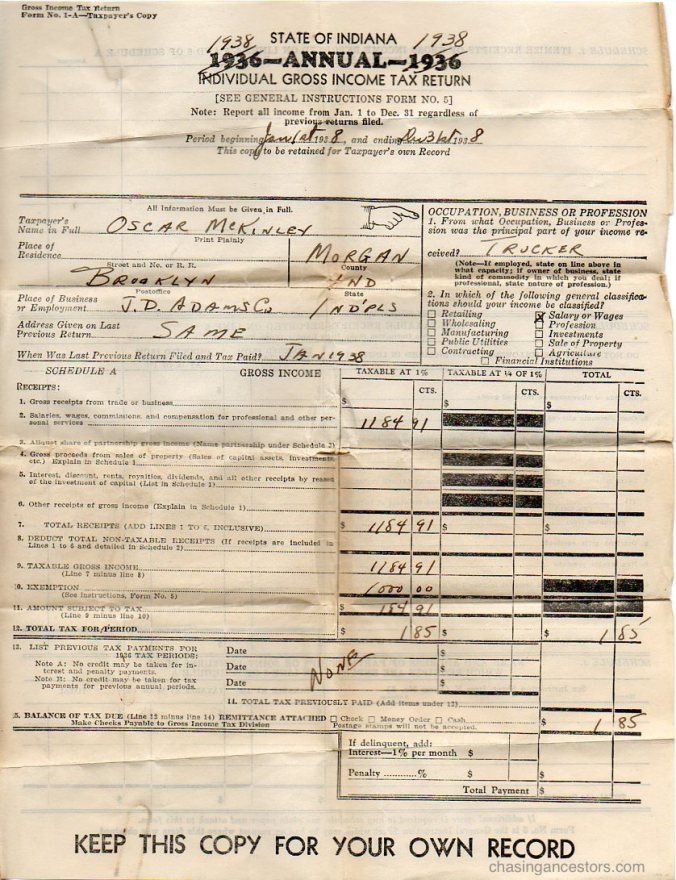 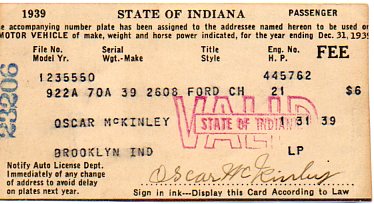 The 1939 Indiana Motor Vehicle Registration card was also in the billfold. He owned a Ford & paid a fee of $6.

Then there was the cover of a Basic Mileage Ration book from the U.S.A. Office of Price Administration, dated Nov. 20, 1942. It indicated Oscar drove a “Ford V-8 Coach.” It was an “A” ration book, which allowed Oscar 3-4 gallons of gasoline per week. It was the lowest priority for gasoline rationing during WWII.

Finally, there was a folded news clipping from a Martinsville, Indiana newspaper with no date. The title was “She Was a Teacher” with a woman’s photograph under the title.

While it does not give the full name of the woman, it mentions “Miss Asher,” who taught school for over 35 years. It appears to be a eulogy for Miss Asher. So who was Miss Asher & why did Oscar keep this clipping in his billfold? Turns out that there were 2 Asher sisters who were school teachers, Goldie and Grenda. The Indianapolis Star reported that the sisters completed their training for the “4 year elementary license” at the Indiana State Teachers College at Terre Haute in 1931. Obviously, they had been teaching for quite a while before then. According to the 1940 US Census, they lived in Jackson Twp, Morgan County, IN. Goldie never married & died December 19, 1942. She was 55 years old. It would make sense that she is the “Miss Asher” mentioned in the article, as notices on the back of the clipping mention Christmas. There is one more connection between Oscar and Goldie Asher: they were First Cousins once removed.

So there we have it, the things found in Oscar’s billfold. I wonder what people would find interesting about the things we carry today?

2 thoughts on “Things Found in a Billfold…”